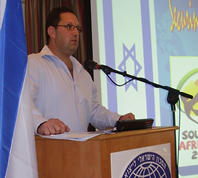 For Israeli Sgt. Maj. Marc Kahlberg fighting terror has become a way of life. Since he was one of the first responders on the scene of a major bomb attack on a hotel in a seaside town north of Tel Aviv in 2002, he's been developing ways to protect the civilian population, first in Israel and then in America.

Now Kahlberg has combined his experience and know-how with Jim Gort, an American Detective Sgt. based in Florida, to create an anti-terror organization - the American Israel Counter Terror Officers Organization (ICTOO) - to help America mobilize its forces to learn from Israeli tragedies and experience, and teach them how to recognize and stop terror attacks.